Mandeep Singh Sidhu (born 1978) is a multi-talented and multi-faceted personality. Grandson of an army officer and son of a gazetted officer in the postal department, he has never attempted to avail higher ranks on their footsteps. Instead, he chose the unpaying path of collecting and restoring heritage. Being well-versed in four languages (including Urdu) he has numerous articles and interviews of and about age old personalities of the pre and post-independence era of the Punjabi Cinema published in all top journals and publications. He has been a part of the editorial boards of the Rozana Spokesman, Punjabi Screen, Awaz the film magazine and the likes. He has been a noted columnist with the huge readership and fan following in Punjabi Tribune, Desh Sewak, Daily Ajit, Punjabi Jagran, Daily Bhulekha (Lahore), The Times of Punjab, and Punjab Times (both US based), Daily Hamdard, Pardes Times, Punjabi Awaz (Canada), Media Punjab (Germany), Rozana Desh Videsh Times (and Indo-canadian venture), Daily Post (Chandigarh) to name a few. He has been a constant writer of film and literary periodicals like Preetladi. Mehram, Tasveer, Sangeet, Darpan, Small Screen (Hindi), Music Times, Film and Music and many more. He also contributed largely to the Punjabi Screen Film Directory (2015-16). 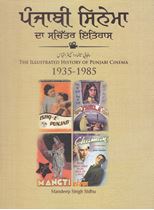